Even after spending three years in a hackerspace myself I decided to do a proper research about what kinds of people visit such creative spaces around the world. Following a lot of reading and visiting several Spaces across different continents I came up with more than a dozen of “archetypes” and chose those which could be best represented in a story.

All the designs and descriptions reflect the current state of my work and are a subject of change. 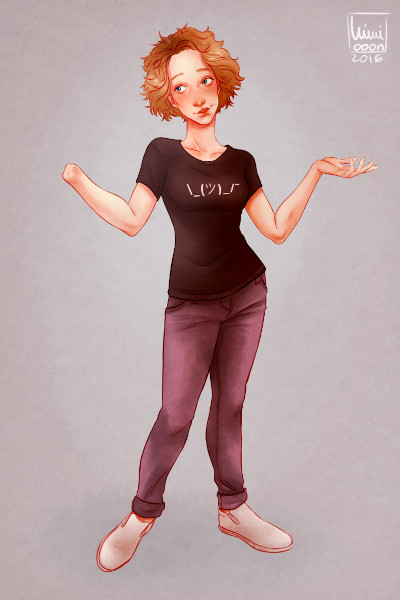 There’s that one person who always comes to the ‘Space to work on their project, hellbent on finishing it no matter what. Everyone wonders when they’ll finally get tired, but they possess some kind of vision that drives them to yet another sleepless night over signal analysis or PCB schematics. 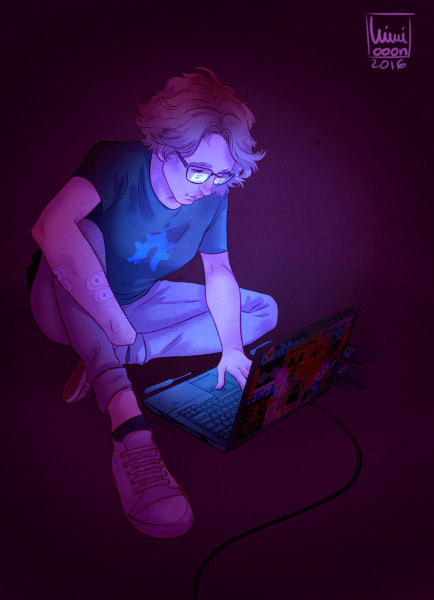 Suzanne is working on an EMG interface for her missing hand - NOT a prosthesis. She wants to be able to operate computers with what she has, not just to wear some cumbersome glove which would allow her to look normal.

Many people perceive her as a token girl or the Glider’s mascot, which she openly hates. Suz wants to be judged for what she does, not how she looks.

Professional (and ranked) CTFer and main administrator of all the Glider’s infrastructure, Cynic has probably the biggest overall IT expertise in the space. He spends most of days reconfiguring the servers or playing with some new dongles shipped from China. No one knows if he has a real job - or what’s his actual name.

Cynic is quite bitter when it comes to people, not believing in most of the educational effort other hackers undertake. The masses won’t learn anyway. 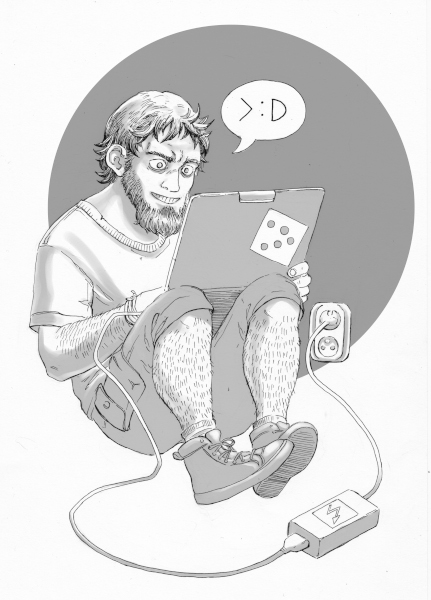 He finds some joy in exploiting that stupidity, writing elegant trolling tools and preparing pranks - or just spreading some civilian-grade chaos on the messaging boards. 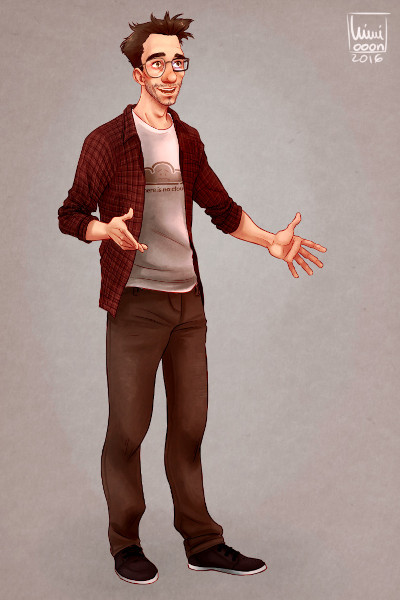 Adam loves Glider as a community and wants to keep it as varied and lively as possible. Even though his constant stream of ideas doesn’t play well with everybody, he is somehow able to convince them to join a new manifestation - or a hackathon - just one more time.

He’s the NGO guy, helping different organizations to maintain basic security measures or have database backups done on time. Every day he does something for somebody - and mingles with other activists at every public event.

When he does have some free time on his hands, Adam likes doing some journalism, searching unwisely published databases or scraping the web, seeing much more than his colleagues from the press. 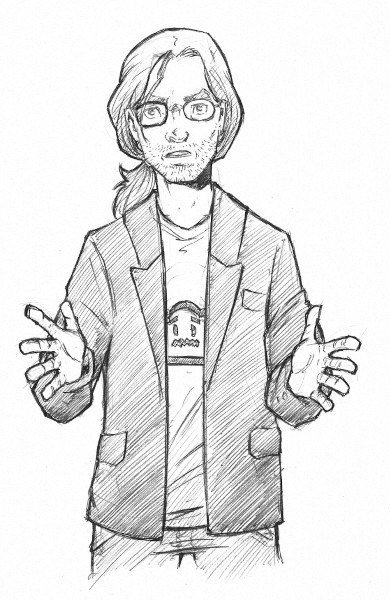 With all the social activism, Adam tends to be a little too self-focused. He is known for stealing the spotlight and claiming different projects as his - even if all he did was to deliver some leads. 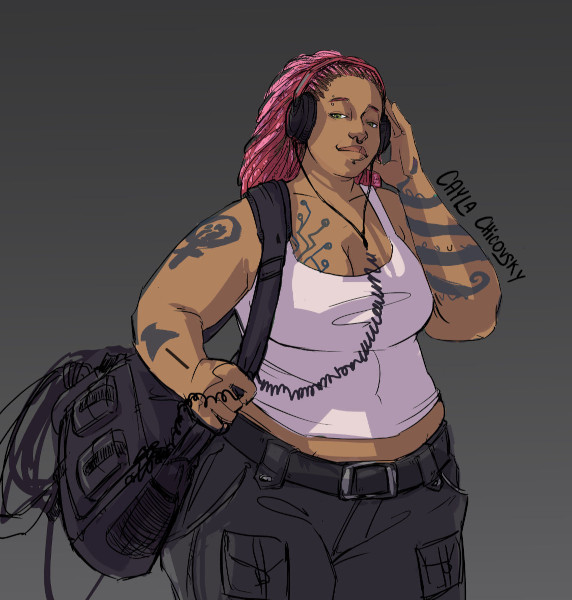 Amanda is an anarchist working between the Glider and a local squat. She’s an outspoken feminist - and while Suzanne can just ask to “leave her alone”, Amanda will be very vocal in criticizing every inequality.

She’s a sound operator to be found both at a movie set and preparing events. Her initial love for punk rock and metal has eventually led her to value much more types of music - and even try experimenting with creating something herself. Amanda keeps a collection of old USSR synthesizers in Space and can be often found playing them - and with them. 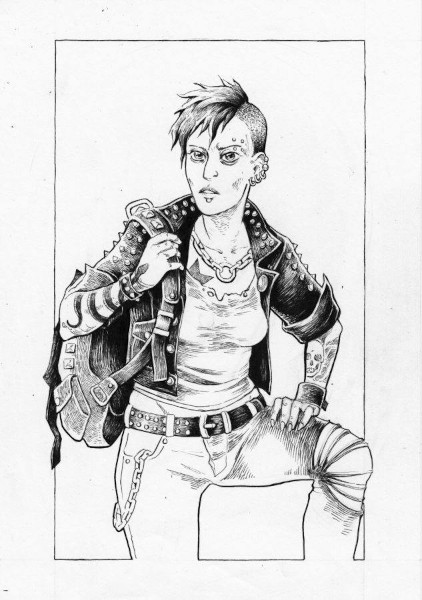 Getting close to her 30th birthday Amanda has some questions about her life to answer. She’s slowly getting tired of being a “bigger sister” for a lot of other anarchists, and still doesn’t see the change she had hoped for most of her life. Is this the time to change the approach? 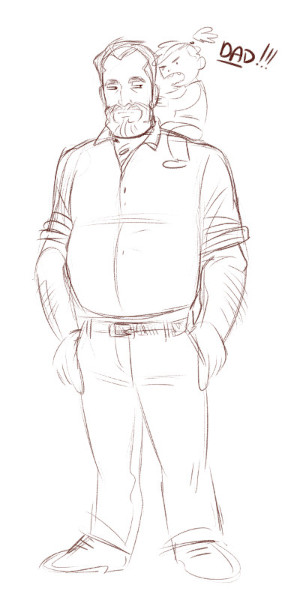 One of the original Glider founders and a well known figure in the local Maker movement, Robert is also a family man. He loves taking his kids - Cleo and Mike - to the Space and teaching them how to build a robot or to fix a bicycle.

While the least-present of the “core crew”, Robert is also the most responsible of them. This often leads to conflicts, when he trusts Adam or Cynic to get something done - and sees it being forgotten somewhere along the way.

He’s pretty adamant at keeping the Glider free of politics - it should be a shared workshop, a place to run classes from, not any kind of lobbyist institution.

Felix tends to work in hipster cafes and craft bars, co-organizing nearly every tech event in the city. He really likes the Glider and supports it with a permanent discount for all the members. That’s usually enough for everybody to forget his unsavory obsession with apples.

While Cynic is perceived as a privacy freak, sh0dan is just a mystery. No one knows his (or her) identity, they’re just hanging around on the IRC with outlandish stories which sometimes turn out to be true. They were never seen in the Glider in person - or never admitted to their IRC persona.

From time to time sh0dan sends an anonymous gift to the Space - a long sought part required to complete somebody’s project, a gold-framed photo of Richard Stallman or a box of Mate.

Widely hated in some ‘Spaces, embraced in others, the Startup People believe in LEAN and SCRUM with all their hearts, knowing they can create the Facebook of tomorrow. Or Uber. Or Whatsapp. They just need A Vision.

Kasper has that - as well as quite a good business network. And a deep knowledge of Powerpoint (though he has been learning Reveal.js as well). For all the rest, there’s equity.

His adamant ignorance to all things scientific and technological has lead Kasper to transhumanism and belief in the singularity (which is near). Unable to really explain what that is, he simply states that Google and Facebook will bring a better tomorrow.

Most people at the Space deem him irritating, but Cynic and Suzanne outrightly hate his guts.

Using the space at strange hours between midnight and dawn Martha hides from everyone in a hoodie and huge headphones. She works on her own little pieces of art - small browser games or eerie dynamically generated adventures. She loves pixel art and seem to infect everyone around her with that aesthetic.

Originally convinced that Bitcoin is The Next Big Thing, Greg underwent a brief but intense therapy by Cynic and Adam. It was meant to cure him, or at least make him read the fucking whitepaper.

It only convinced Greg that Blockchain is The Next Big Thing.

He is now trying to write a toilet-paper-dispenser with it, but everyone’s supporting him as long as he learns something along the way.

Seemingly out of place, Juliet brings a whole new air of cosplay, furries and Undertale slashes to the Glider. Initially Robert wasn’t convinced that this type of activity is what he founded the Space for. It was only after seeing Juliet with a sewing machine - or learning how to put LEDs in fursuit’s eyes - that he accepted her as a full-fledged member.

Tall and so bony he looks like a wraith, Adrian is a mathematican, functional language lover and classical music composer. He is able to awe everybody with his skill to combine all three - and create music generators or neural networks composing for him.