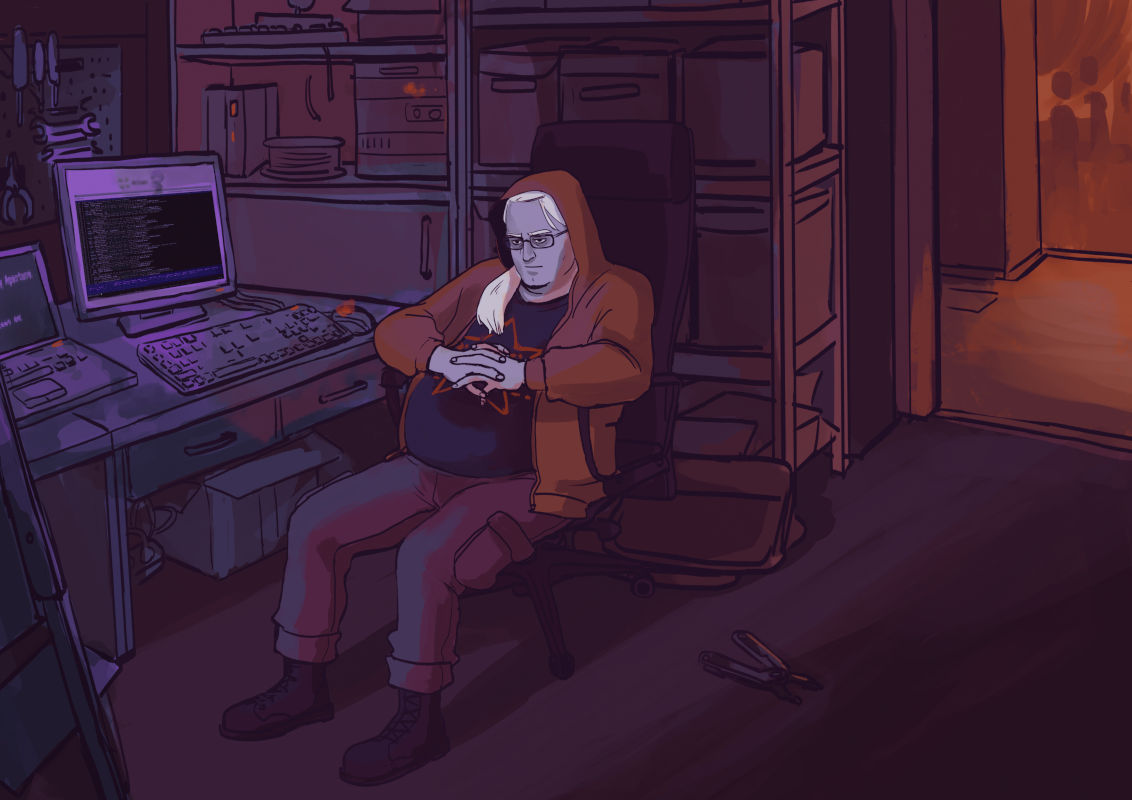 I’ve started this project over seven years ago, in 2015. Back then, I thought that creating a new narrative is easy. Being a daily reader of dozens of webcomics from the most talented creators on the planet, I imagined that almost all comic artists are waiting to unleash their potential by telling new and ambitious stories, just waiting to change the world.

Well, I was wrong.

Turns out that creating a new narrative, new visual language, new hieroglyphs to convey meanings not previously present in popular culture is extremely hard, both for a writer and a visual artist. It requires a mastery of your craft, worldbuilding, scoping, project management and more. Tolkien didn’t spend decades working on the Middle Earth by accident - this really takes a lot of time.

I approached multiple artists comissioning them to try to create some stories and a visual language together. Some of them were very confused, others were splendid, but I couldn’t deliver a vision clear enough to jump into the project and pour our lives into it.

Throughout all those years I’ve never stopped looking into it, filling notebook after notebook with notes about hackers, technology, narratives, disability, Solarpunk and more. Some of it made it into my HOPE 2020 talk, other notes can be found in this project’s wiki.

Eventually I ran into an incredibly talented Solarpunk writer with a huge experience in technology and a beautiful, very human soul - Ana Sun. Together we forged some of my notes and experiences into the first Glider story about Suzanne - the inventor.

You can read the story and see if it helps you understand the question we wanted to convey: why would you want to modify technology? Do hackers and their drive to modify, change, remake - seem more human, understandable now?

Glider is not a graphic novel, as I originally intended - it needs more narrative groundwork first. With the help of all the artists who lent their pencils, brushes and tablets - we have some symbols we can build on, a beginning of a foundation.

I think we can build awesome things on it.

This description was created in 2016 and not all parts of it might be up-to-date.

According to Wikipedia, a hackerspace is “a community-operated, often Not For Profit workspace where people with common interests, often in computers, machining, technology, science, digital art or electronic art, can meet, socialize and collaborate”.

Such spaces encourage a mix of genuine curiosity, hands-on approach, bravery to open black boxes and use things in ways they weren’t designed to. Values are alien to Universities, unseen in most software houses or NGOs.

It’s not only about technology, either. The activists from Hackerspaces are fighting for a lot of causes. They protect the universal right to privacy and ensure governments' transparency. They help local communities understand the new, digitized world. Knowing how to use modern tools they are able to achieve much more than regular journalists or social workers. 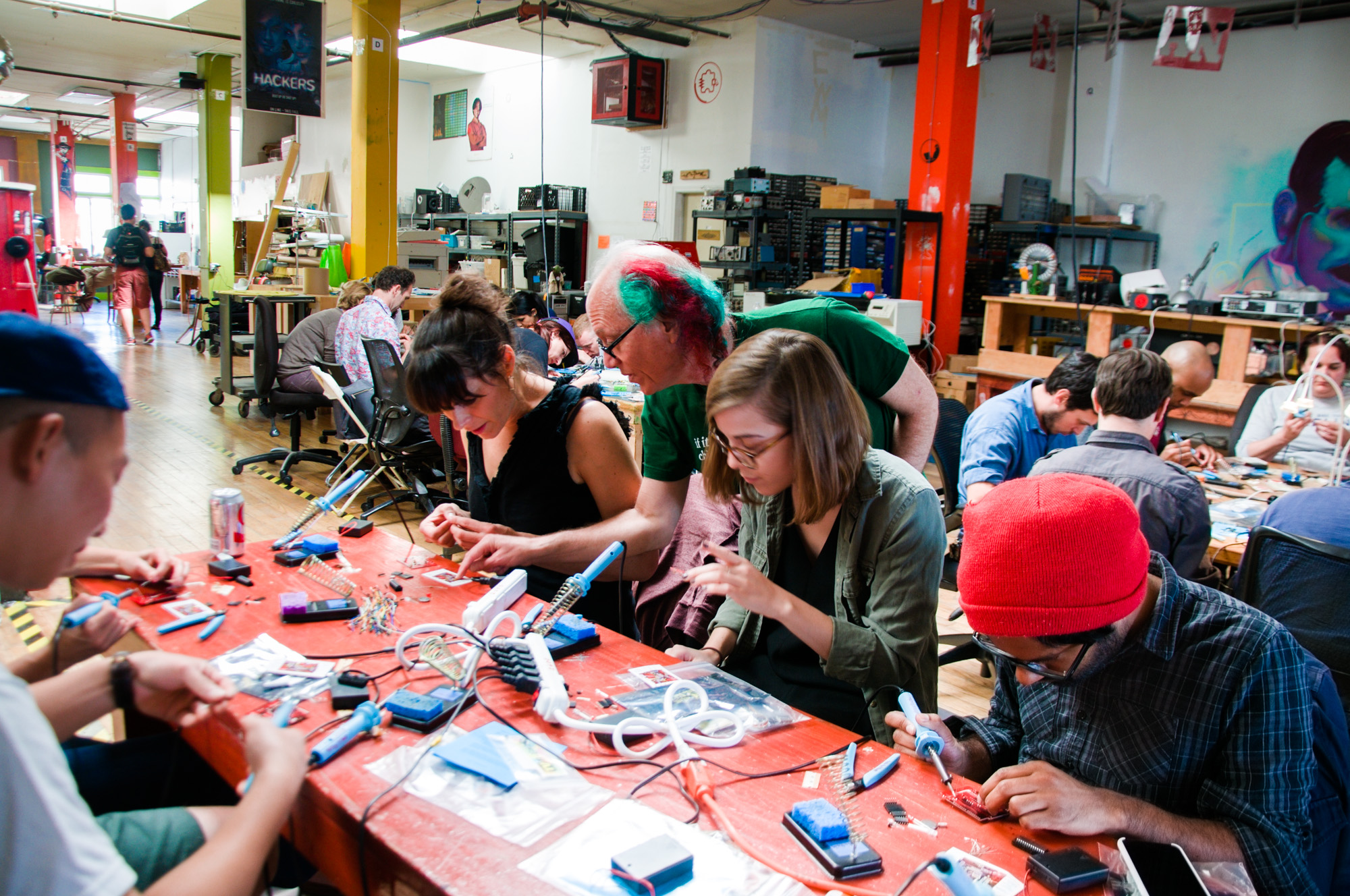 With all the Hackerspaces' richness, they’re surprisingly absent from the popular culture. When someone says “hacker”, most people think about either a lone-wolf black hat, or a hacktivist bent on destroying the world’s order. No one visualizes communities building things together, learning and educating. It’s almost impossible to imagine them taking part in a political discourse or working with the society at large.

I think that hacker values - the hacker ethos - are what we need in our culture. With all the grim dystopias shown as the only way for the humanity to go - the CCC philosophers are calling not to give up and not to give in. Working together, creating and sharing knowledge - those are realistic ideals people can strive for. Maybe it’s a time for a whole new sci-fi genre build around hackers?

There have been some notions of the “real” hackers in the culture already. Cory Doctorow mentioned them in several of his novels: “Makers”, “Homeland” and “Little Brother”, describing several different aspects of the movement. I feel he didn’t paint the whole picture. A Hackerspace is a bustling community of different people: hardware tweakers, activists and educators, infosec guys on their Mate-fueled CTFs, artists trying to create something no one has imagined before and anarchists working to bring more power to the people. 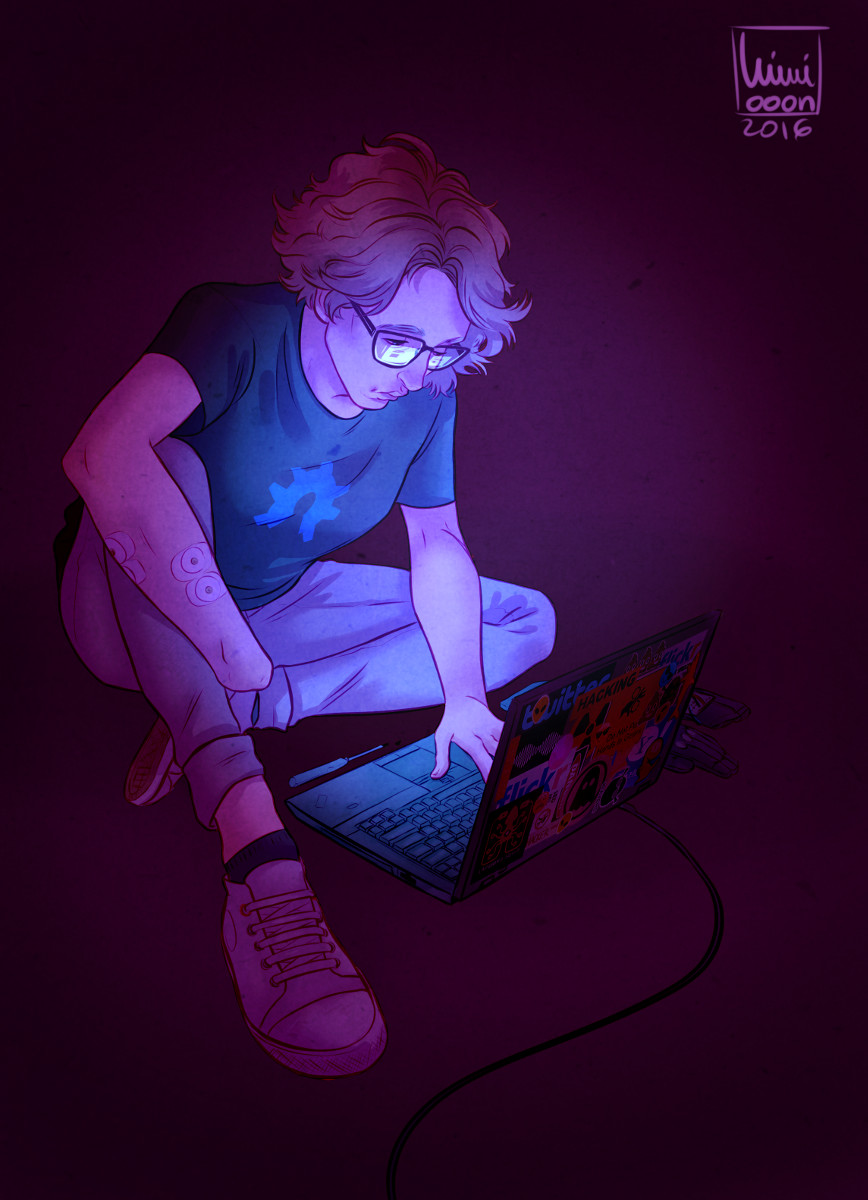 This project aims to offer exactly that: a graphic novel featuring a space where different people meet, each with their own approach to hacking and ideas about the movement. Some of them will work well together, others will clash, and each conflict will be different.

Glider Ink is a non-profit project. Its goal is to allow the widest audience possible to learn what hackerspaces are - and get inspired.

In the spirit of open source I’d like to license the (web)comic under Creative Commons CC-BY-SA. Providing all source files will allow everybody to translate or improve it. It’s being written in English and Polish with some notes for translators already built-it.

All the illustrations for the comic you will see on this blog are licensed under CC-BY-SA as well. 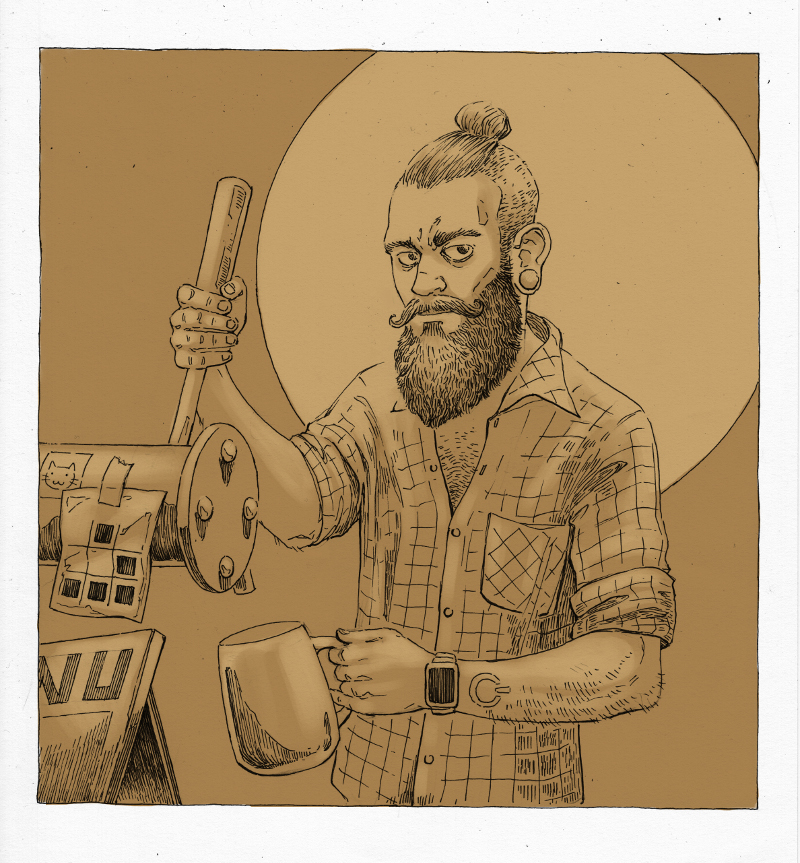 I expect the first “story arc” to take about 150 pages, featuring five main characters. The story should be both accessible to the people from outside of the culture - and entertaining to those within. I’ve decided to go with a fictional Hackerspace and characters for more creative freedom. Given that, all technology and social movements should be represented as realistically as possible.

The story I’ve written so far takes place in a non-specific European city, where Glider is the only running hackerspace. Due to a lot of misconceptions about the hackers being only white, I’d like to keep the cast a little more diverse - with guests or cameos from Palestinian, Iraqi, Kenyan or Filipino spaces. Glider’s relation to existing hacker organizations such as CCC is not yet established.

I’m looking for an artist interested in co-creating the whole project. I’ve requested commissions from several illustrators already, but haven’t been able to find a long-term partner. All the funds for the first several months of work are already there - and we should open Patreon / PayPal / BTC wallet for donations as soon as we start delivering something. Sadly, I can’t give you any hard estimates yet. 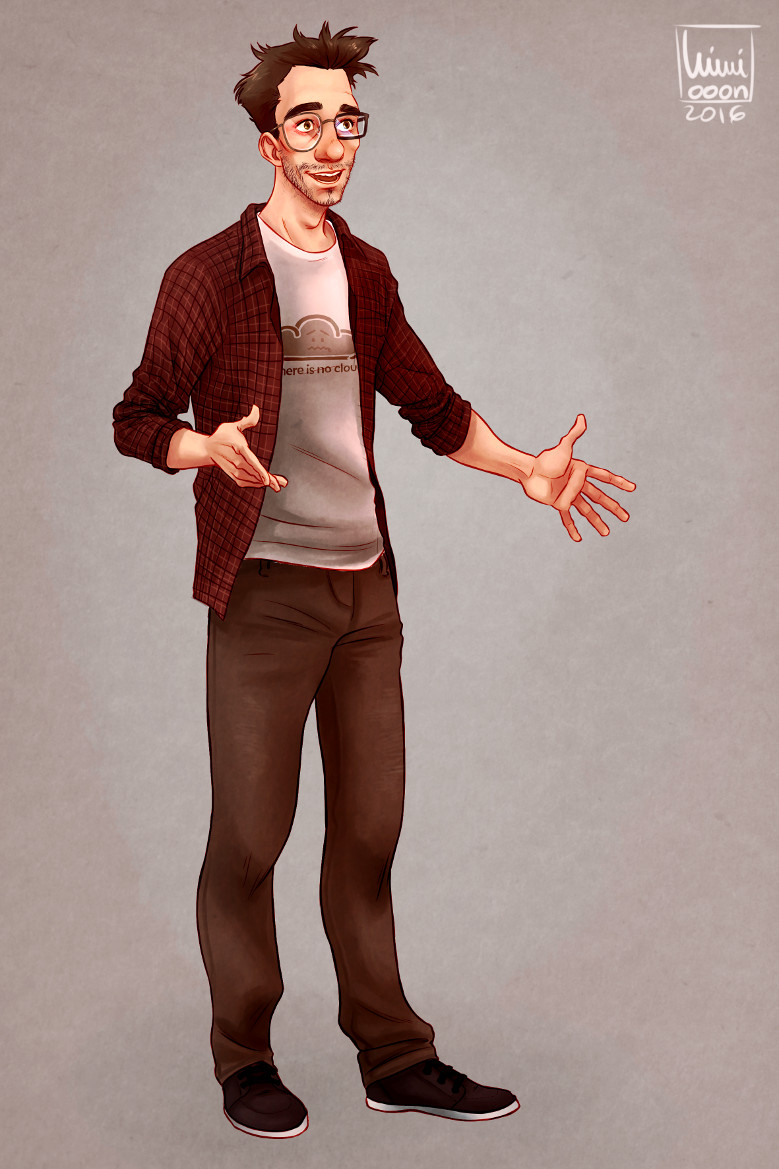 You can read more about the gallery of characters that you’ll meet on the course of the story.

If you are reading it from the 33rd Chaos Communication Congress, there should be stickers somewhere. Go look for them and join #glider-ink on Freenode to discuss the project!